How to get to Meteora, Greece

Wondering how to get from Athens to Meteora in central Greece? Read below to find out how!
We meet many people from around the world through our Photography Tours and find that while there is much familiarity with the Greek islands, knowledge about mainland Greece is less common. The area offers a unique natural landscape full of towering mountains, deep canyons, flowing rivers and cascading waterfalls.
When people do discover this off the beaten path part of the country and decide they want to visit, the most common question we get is, “How do I get to Meteora?”
Distances in Greece are generally not far from one point of interest to the next and mainland Greece is not large in size, but due to the particular layout of land and mountain range, the road network in some areas had made it complicated to travel across it in the past. In recent years, however, new roads have been paved and constructed to allow safe and efficient travel to and from the area.
The public transportation system has also been significantly improved and many tourist agencies have been set up to handle private or small group transfers. At Meteora Photo Tour, we handle transfers from Athens to Meteora, Thessaloniki or from another destination in Greece via plane, boat or bus upon request.
Below we have highlighted three ways to get from Athens to Meteora, as this is the most common option. Upon arrival, you will immediately find why this place is considered one of the most sacred and breathtaking destinations in the world, where millions of travelers now visit each year.
There are three ways to reach Kalambaka and Meteora from Athens: by car, train or bus 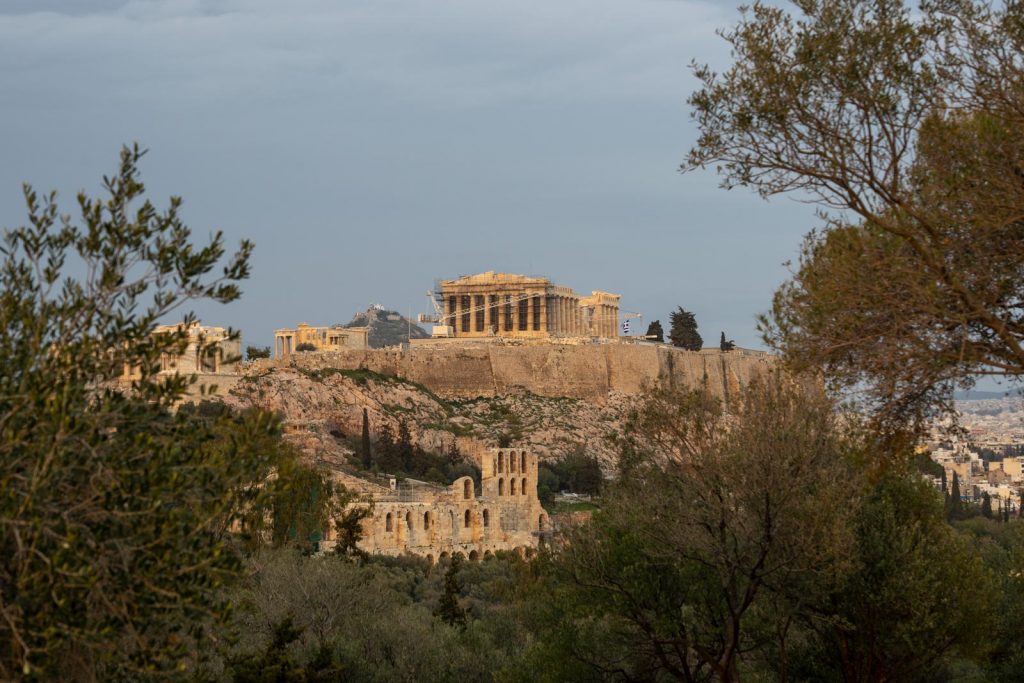 Get from Athens to Meteora by Train

If you choose the train as your choice of transportation from Athens to Meteora you will start by heading to the Larissa train station in Athens. It is very easy to get there by utilizing the Athens Metro! Wherever you are in Athens there will most likely be a metro station nearby.
If you are at the Eleftherios Venizelos airport in Athens and you want to travel directly to Meteora you can take the metro from the airport (blue line), stop at Syntagma station where you will change the metro wagon to the red line, after four stops, to Larissa Station. 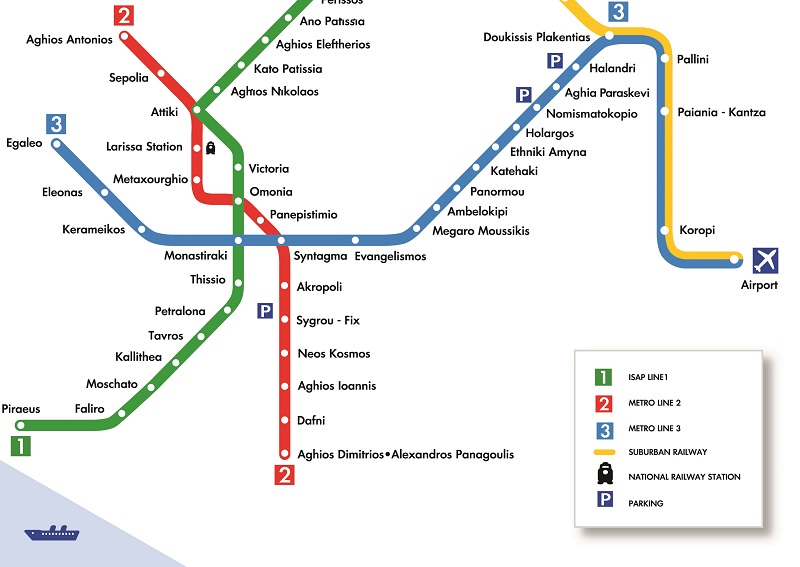 If your hotel is in the center of Athens, close to the Acropolis and Monastiraki square, you can take the blue line metro from Monastiraki, and get off after one stop at the Syntagma Station where you will change the metro wagon and take the red line to Larissa Station.

The following are train route options based on time of travel:

If you decide to come by train first thing in the morning you don’t have to worry about train changes because Kalambaka is the last stop on the route. At any other time, you must change the train at Paleofarsalos and continue to Kalampaka 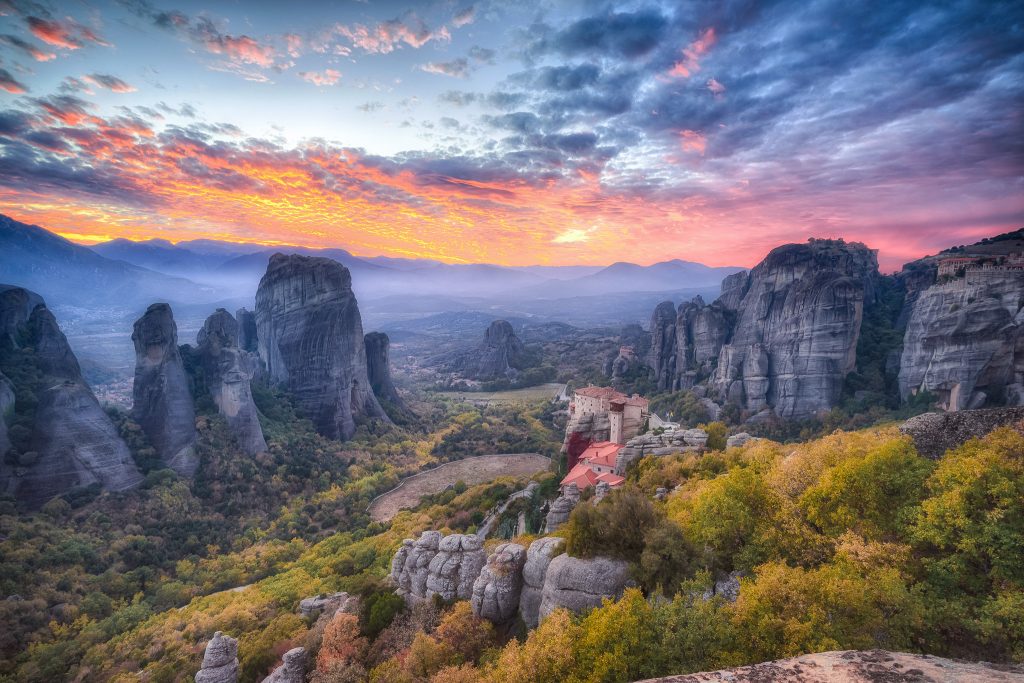 To return back to Athens: If you choose to return to Athens at 17:15 in the evening you will go straight to Athens. Otherwise, you have to make a train change at Paleofarsalos.

The link to book your train tickets is https://tickets.trainose.gr/dromologia/http://www.trainose.gr/en/

Get from Athens to Meteora by Bus

Another way to get to Meteora and Kalambaka in central Greece from Athens is by bus.
The bus station in Athens, Liossion bus station, is located at Stratigou Dagkli 26, in the area of three bridges. To get to Meteora you will take the bus to Trikala, which is the last stop.At the Trikala bus station, you will make a bus change to Kalambaka. You will need to give yourself approximately 4 hours to get to Trikala and 45 minutes from Trikala to Kalambaka.
To get to the Liossion bus station from Athens airport you can take the line x93 of the city bus.
If you are in Athens city center, the nearest metro station to Stathmos Liosion is Kato Patisia, line 1 of the Metro. After that, it is a 10 minute walk to the bus station, or you can take one of the city buses that passes by there.

Get from Athens to Meteora by Car

Of course, you always have the option to rent a car and road trip to Meteora. This will allow you to travel on your own time and relieve you of any stress of catching a bus or train. Utilizing the car vehicle GPS or a navigation app, input Kalambaka as your destination to get the route.

Google Map from Athens to Kalampaka

The route is simple You will drive following the E75 highway and after about 4 hours you will see the stunning rock formations of Meteora before you. Please note that this road includes tolls and the cost for one route is about 17,75 E.  (can you pay cash or a credit card?)

It is worth noting here that Ancient Greece has points of interest of great historical and cultural importance and value. One of them is the Delphi Oracle and the statue of Sparta’s Great King Leonidas. You will find this at the midpoint of your journey from Athens to Meteora, and a detour would be worth it and would certainly be a beautiful experience if you are visiting Greece for the first time.

Google Map from Athens to Thermopylae

Need private transportation to get from Athens to Meteora? Give us a call or send us an email.